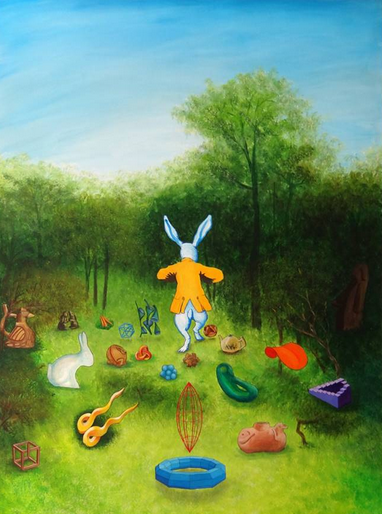 "Antonio Peticov is a Brazilian visual artist with a huge output in many media, with emphasis in painting. He works as a voracious “anthropophagist,” a Brazilian cultural concept that understands national identity as a process of devouring and recreating foreign culture. Peticov feeds himself with a vast and fertile repertoire of art history, pop visual references, philosophy and science, promoting an encounter of surrealism, psychedelicism, science, logic and mathematics. His large Tenniel-esque oil paintings propose puzzles from provocative artists and scientists such as Escher, Penrose, Edgard Rubin, and others among classical pictures of impossible geometry, visual illusions, paradoxes, surrealist objects and other curiouser-isms."