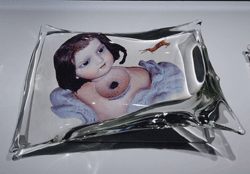 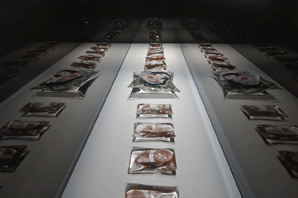 This installation has 11 glass pillows that deform reality. This suggests the murmurs of Mrs Liddell's three little girls Alice, Lorina and Edith with their frail thin arms tightly holding their pillows decorated with many small comforting images of Alice that were borrowed from John Tenniel's illustrations (Alice in Worderland). In the center, of these 10 smaller pillows and 1 larger pillow that deforms Alice's portrait that was inspired by two photos taken by Charles Dodgson (Lewis Carroll).

"During my work process, I researched books and the Internet looking for figurative representations of the human body, specially that of children. Through my introspection, I discovered antique dolls belonging to the world of little girls with their used bodies, dislocated members and especially intense gazes. It awakened intensive impalpable emotions and feelings that one would sometimes wish would remain absent, sometimes ephemeral and sometimes prolonged. I imagined many volatile and mute tales touched by imaginary and factual events.

After many days and months on this path, I accumulated more than 15 000 photos of expressive dolls. About 4 000 of these were used for my 5 installations : Contes muets - Les poupées n'ont-elles pas, de tout temps, été les seules à entrendre les mots qu'il fallait taire ? Mute tales - Weren't dolls of all times the only ones to hear those hushed words? "

Michele Lapointe, born in Montreal, is known for her monumental installations. She teaches sandblasting and assembling techniques at Espace Verre in Montreal since 1990. She focuses part of her teaching on artistic architectural integration. Her artistic work follows an imaginary archaeological process which excavates dreams, memory and time.

Posted by Adriana Peliano at 16:15