DALICE: Decipher me or I'll devour you!

Follow some adventures of Alice in Daliland, her shadows and echoes.
Look for an Alice jumping rope or a bell with her shape.
This icons have appeared many times in Salvador Dali's pantings.
They are like metamorphic travelers of lucid dreams. 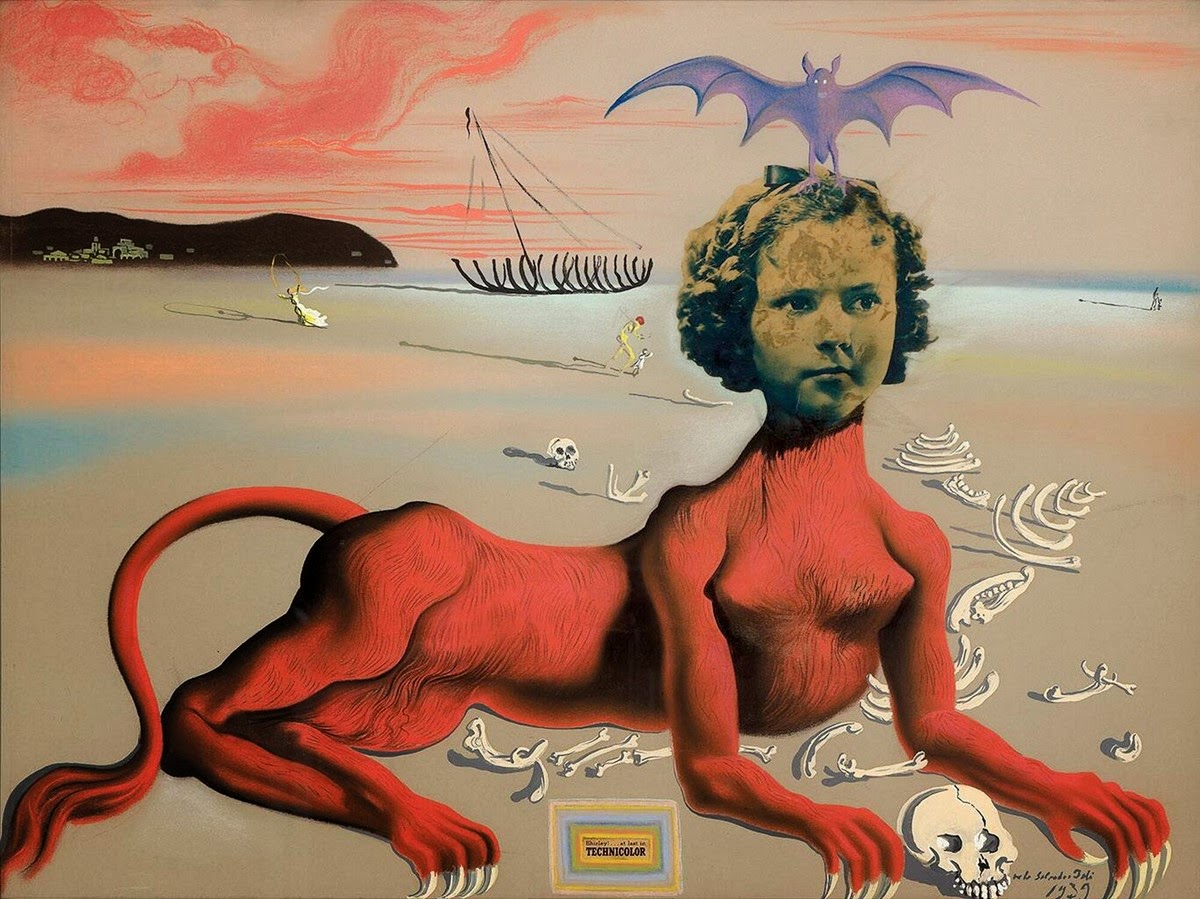 Shirley Temple,The Youngest, Most Sacred Monster, of the Cinema in Her Time (1939)
Salvador Dali 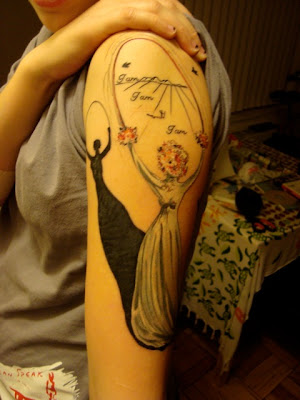 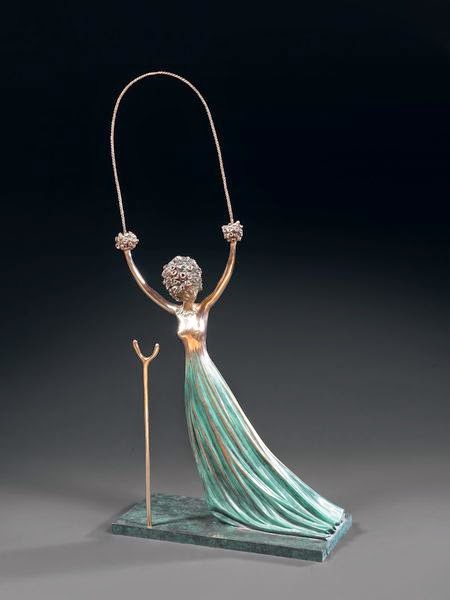 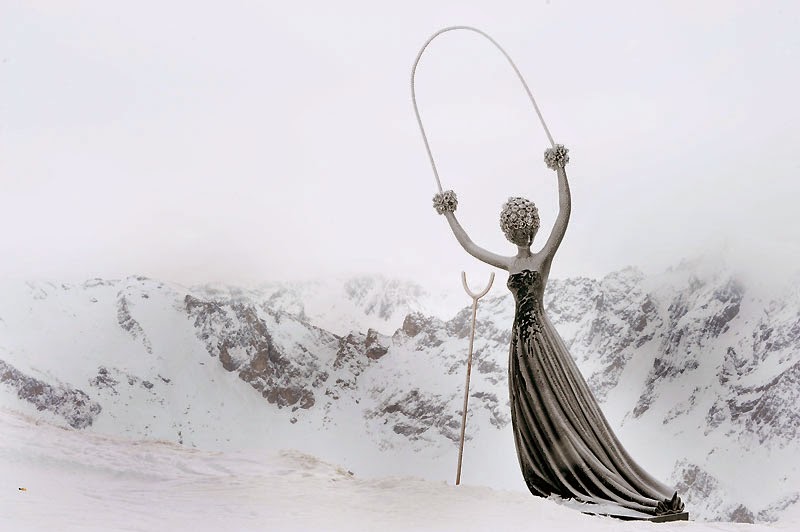 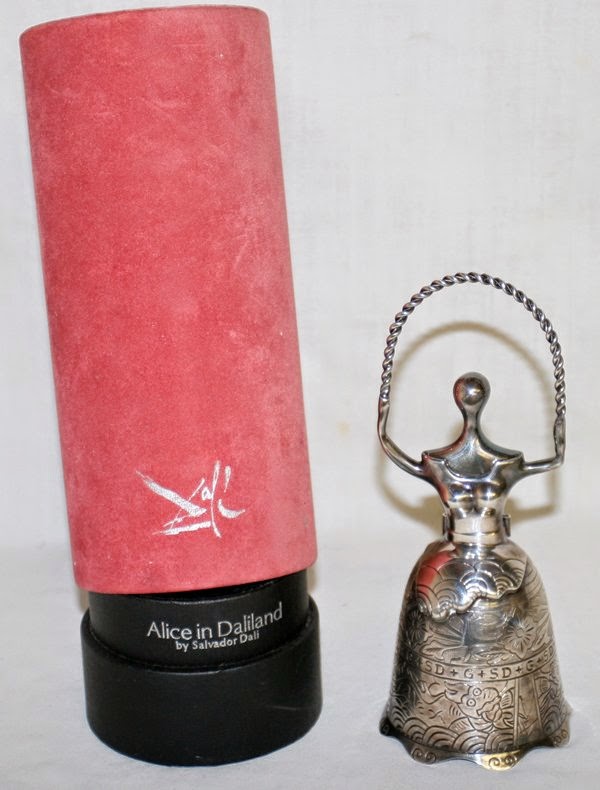 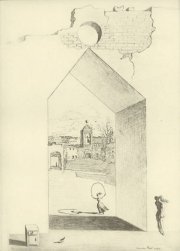 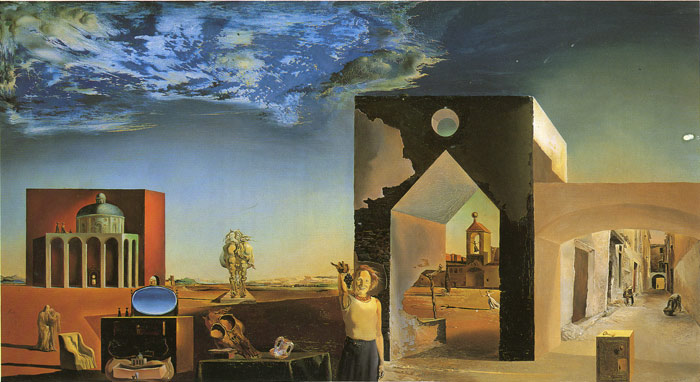 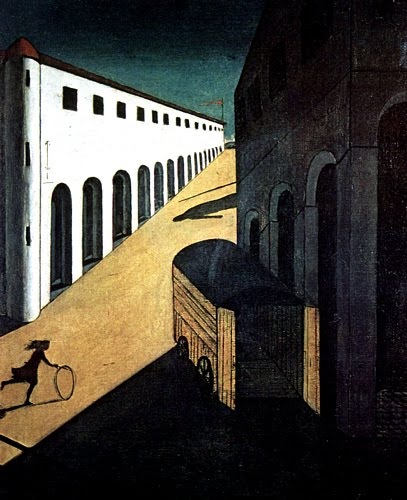 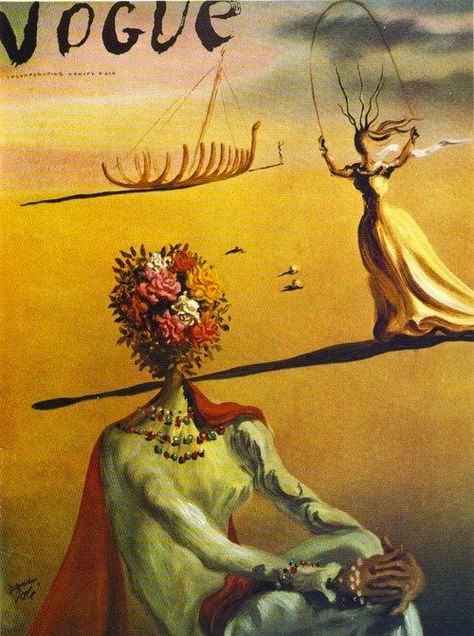 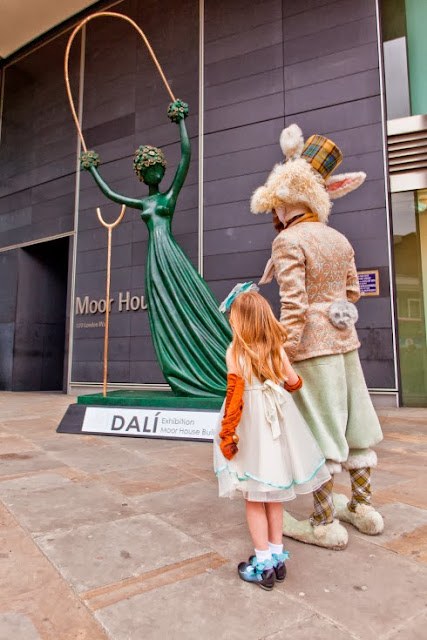 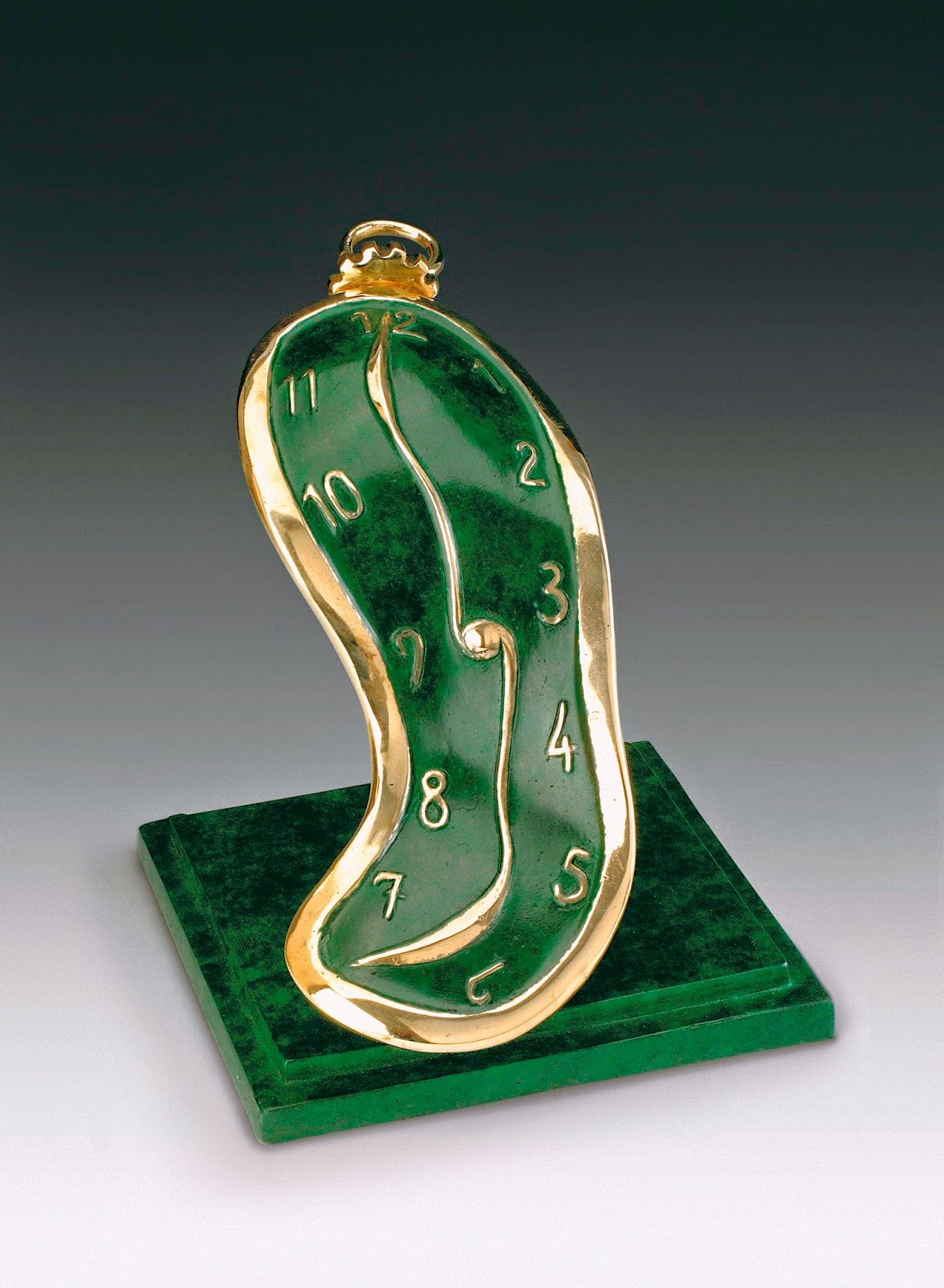 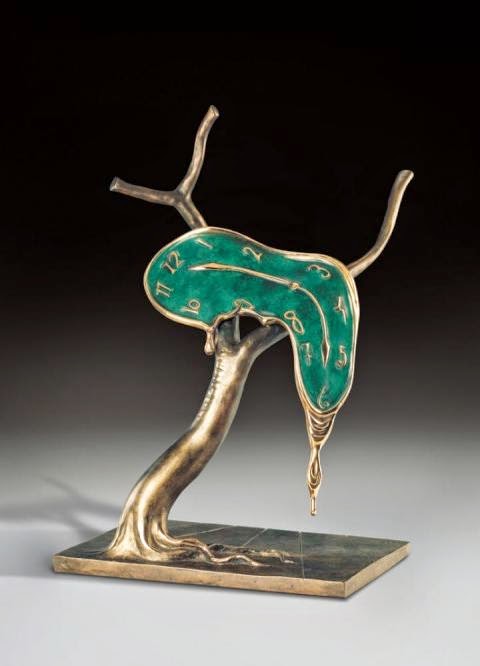 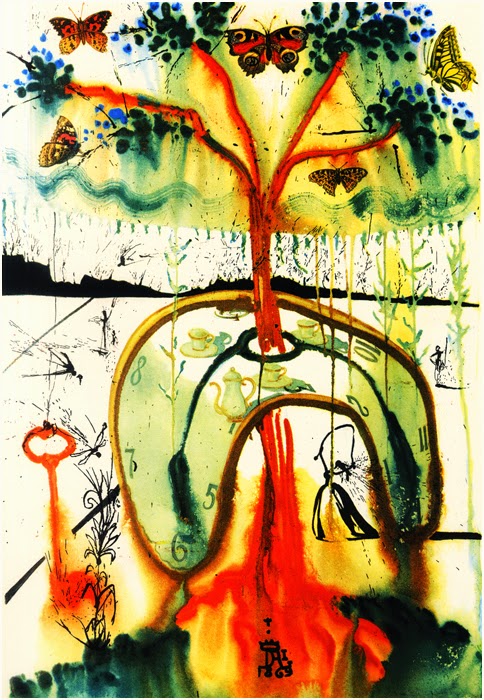 "Lewis Carroll left the doorway to our dreams open a crack. Alice went through it and found herself in a labyrinth of mirrors, an endless game, projections of herself created by surrealist artists. Surrealist muse, sphinx, femme enfant, Alice unfolds into multiple visions of a modern myth. She enters portals to the unknown, plumbing the depths of the unconscious, rites of passage; the revelation of a sibylline and archaic female, she becomes mixed with landscapes of a world in ruins, in the echoes and phantasms of the nightmares of war and of the dawning of a new world. (...) 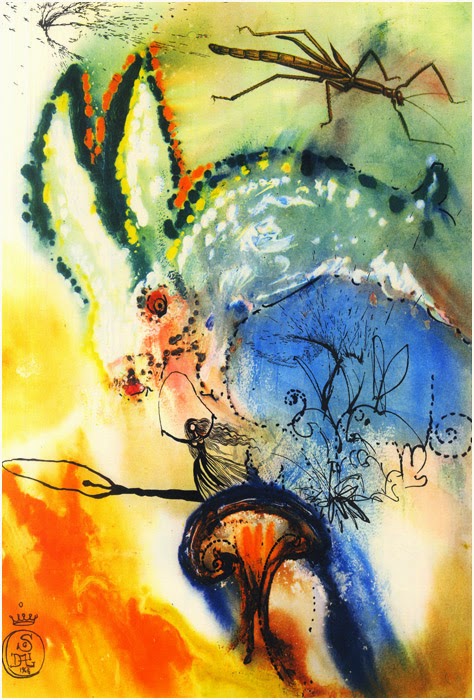 Continuing her journey, Alice entered a portal and was taken aback by a series of prints and illustrations by Salvador Dalì that depicted her adventures in Wonderland (Maecenas, 1969). She became a mysterious figure jumping rope through a landscape filled with Dalì’s obsessions, such as the melting clocks of the Persistence of Memory series. The clock became the Hatter’s table, set for tea, with time madly stopped at six in the afternoon. If the clocks reveal the mechanics of measuring linear time, the melting clocks refer to relative time and the universes of memory and pleasure. 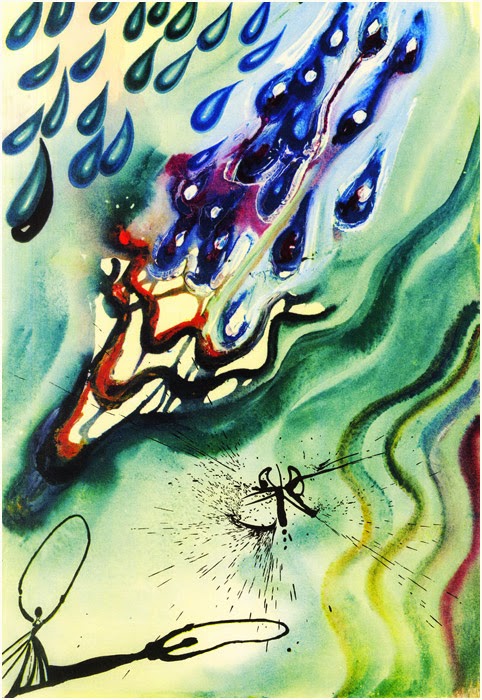 Dalì simulated delirium, speculating on the propriety of the uninterrupted becoming of every object upon which he carried out his paranoid activity. Dalì’s counterfeit paranoia, the “paranoiac-critical method,” allowed him to reorder the world according to his inner obsessions. The limits between the real and the imagined became ambiguous. And his paintings began to represent a space in which everything that can be seen is potentially something else. Wonder, dreams, and the unconscious serve as the stages for metamorphoses, where the objects, symbols of irrational desires, are subjected to sudden mutations, an uninterrupted becoming. Clocks, mushrooms, caterpillars, butterflies, cards, shapes are constantly being diluted, blending and transforming. Wanderer in a dream world, Alice is stunned to discover that everything is in a constant creative flux. 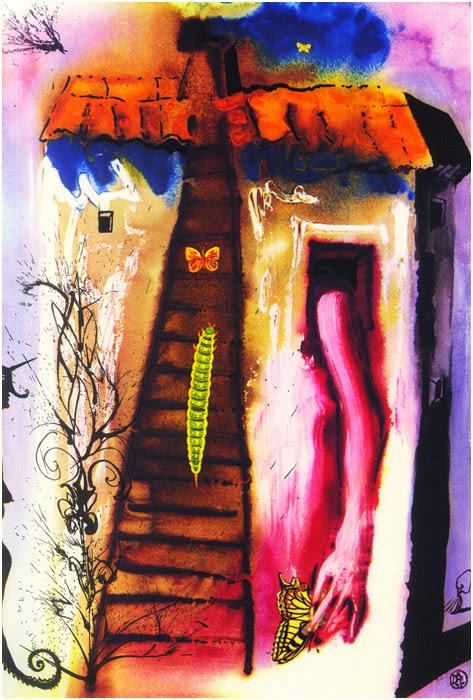 The constant presence of Alice’s shadow in all of Dalì’s images refers to the Romantic dilemma of the double identity, suggesting a loss of bodily identity. In Dalì, Alice was a faceless silhouette, a mirror of herself in shadow and reflection. Surrealist Alices are bodies in metamorphosis and becoming, in a space of dreams and wonder. Dalì’s Alice gives way to the ghostly and kaleidoscopic presence of a multitude of double Alices, nameless in the contemporary imagination. Dalì’s Alice opens doors to new Alices, who ask new questions of the smile in the air—without Dalì."

SOURCE:
The Hunting of Alice in Seven Fits.
Adriana Peliano.

Posted by Adriana Peliano at 16:26