Adapted and translated by
Nancy Sheppard

"...Pitjantjatjara is the language of pitjantjatjara people who inhabit South Australia and the Northern Territory. It is only in the recent years that the Pitjantjatjara language has given a written form. Nancy Sheppard , who has adapted and translated this Pitjantjatjara version, has been very active in producing texts and tapes for the intensive course in the language offered by Adelaide University. for nine years, Ms Sheppard taught Pitjantjatjara children at Ernabella, near Alice Springs. She produced this version of the story with the aboriginal children very much in mind and her manuscript has evoked a delighted response for those with whom she has shared the story.

Like all languages, Pitjantjatjara is the cultural expression of its people, descriptive of the terrain, the fauna and flora and the way of life known to them; it follows that the characters  and settings of Alice have been adapted accordingly. The white rabbit, with its gloves and fan, becomes the Kangaroo, with dilly-bag and digging stick - not, it should be emphasized, because there is no Pitjantjatjara word for "rabbit", but simply because an Aboriginal Alice would naturally have seen a kangaroo in her dream. The caterpillar becomes a Witchety Grub; the pepper in Lewis Carroll's chapter called titled Pig and Pepper becomes itunypa root, while the baby in that chapter not into a pig, but into a native bandicoot. The prickly Australian echidna replaces the hedgehog at the Queen's croquet party, with n this version, becomes the Game of the Witch Spirit; and the invitation for the Queen (the Witch Spirit) to the Duchess (the Spirit of the North Wind) is sent by smoke-signal. possibly the most interesting aspect of the whole project, however, is not the devising of ingenious substitutions to fit cultural demands, but the fact that the Pitjantjatjara version succeeds as a story to be appreciated and enjoyed, chuckled over and remembered, demonstrating in a Language other than English, the universality of Lewis Carroll's imagination..." 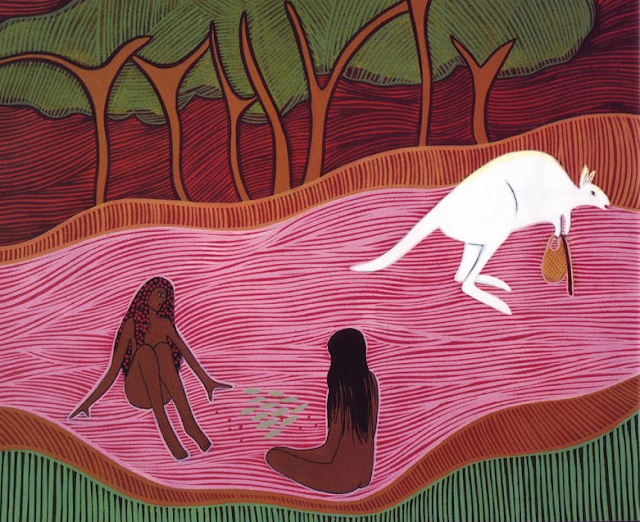 
Alitji tried to help the White Kangaroo find his woomera and dilly bag. 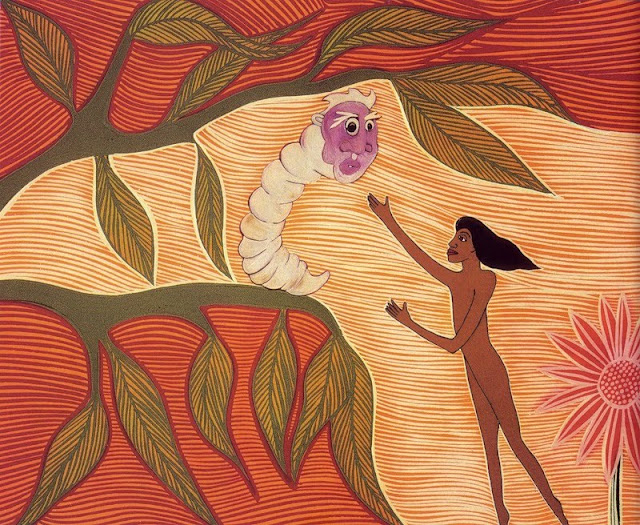 
Alitji gazed up into a tree and saw a large witchety grub. 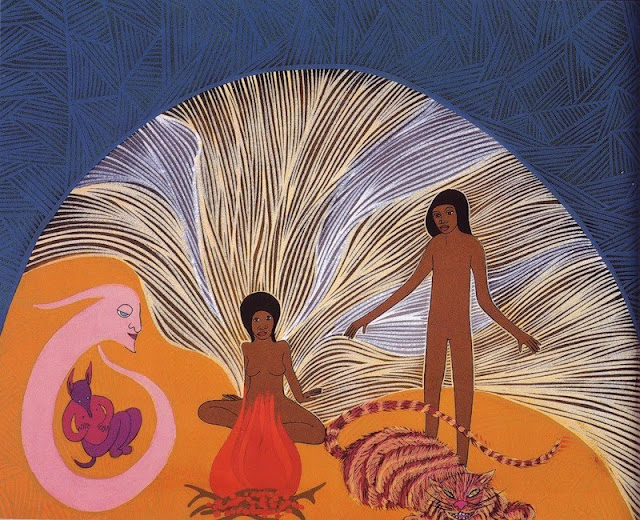 
Inside the wurlie the Spirit of the North Wind was nursing a baby, while another woman was cooking itunypa roots. A wild cat lay by the fire, grinning. 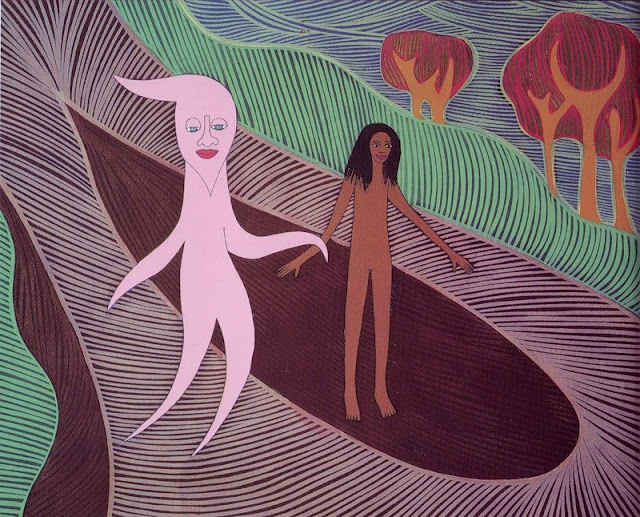 
The North Wind Spirit and Alitji walked off arm in arm. 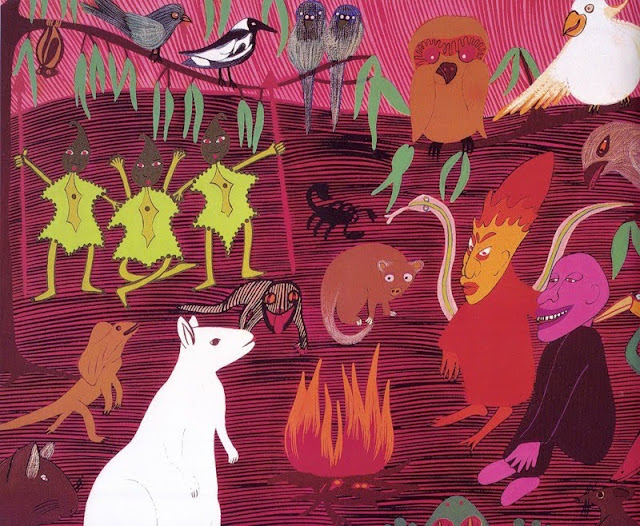 
A great crowd had assembled.

"I am trained as an art historian. My writing is inspired by Australian Indigenous and contemporary art. I am also trained in art curatorship and teaching. My research interests are reflected in my Australian Research Council (ARC) projects: Sacred Ground: New Dimensions in Australian Art, and Spiritual Journeying and Cross-culturalism: The Art of Tim Johnson. My book Aboriginal Art: Creativity and Assimilation was published in 2008. In 2009, I was awarded the ‘Faculty of Art & Design Award for Excellence in Research by an Early Career Researcher’ at Monash University.

I am a painter belonging to the Gamilaroi (Gamilaraay/Kamilaroi) people of north-western New South Wales. I have worked on exhibitions and creative projects for over twenty-five years. These have included commissions, residencies, designs, cartoons, and children’s book illustrations. In 1993, I won the ‘Crichton Award for Children’s Book Illustration’ for my paintings which illustrate Alitji in Dreamland: Alitjinya Ngura Tjukurmankuntjala (1992), a translation of Alice in Wonderland in an Aboriginal context. My book, Aboriginal Art includes reproductions of my recent paintings. I have held a number of solo exhibitions and have contributed to numerous group exhibitions throughout Australia. My paintings often reflect themes of life and nature, and this work helps shape my contribution to the research field I enjoy writing about." 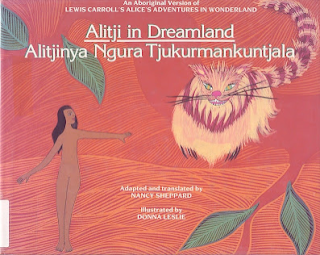 "Grade 4 Up-- Lewis Carroll's classic tale has appeared in over 40 different languages. This version, originally published in 1975, was produced for use with a course at Adelaide University shortly after the Pitjantjatjara language was given a written form. The Aboriginal Alice, Alitji, follows a white kangaroo down a hole into a curious adventure-filled dream. Australian animals, flora, and vocabulary are appropriately substituted: a witchety grub is the caterpillar, an echidna replaces the hedgehog, the stockman's horse is stolen instead of tarts, etc. An English translation is offered alongside the Pitjantjatjara text, and a brief paragraph provides some pronunciation guidance."


"Donna Leslie, a Post-doctoral Research Fellow at The University of Melbourne, sets out to demonstrate how Aboriginal art has questioned the 'assimilationist' policies which prevailed in Australia from the 1930s to the 1970s. Her rigorous and sustained argument, supported by an impressive array of important visual images, reveals an extensive grasp of issues relating not only to the practice and history of art, but also in fields of anthropology, ethnology and sociology. The book is a rare presentation of aspects of the history of Aboriginal art from an Aboriginal perspective, and provides fresh ways of understanding Aboriginal experience. While the author acknowledges the problems faced by Aboriginal peoples, particularly those associated with the former policy of assimilation, her message is positive and encourages a deepening understanding of Aboriginal art, culture and peoples in the spirit of reconciliation. Moreover, she addresses the development of Aboriginal art in the modern Australian city, as well as in the more traditional environment of the land." 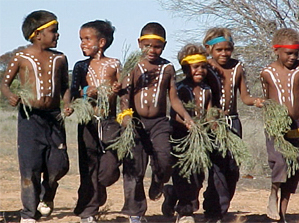 "We are Pitjantjatjara Anangu. Our families descend from the desert people in the north and north-west. The Great Rainbow Serpent Wanampi shaped the landscape from the red spinifex country in the north to the Head of Bight creating rolling hills, caves and lakes in his journey toward the ocean. In 1996, the Yalata Reserve was proclaimed an Indigenous Protected Area (IPA) being an area of distinct character having significant ecological and cultural value. The reserve holds the largest expanse of untouched coastal mallee in the south hemisphere. Under agreements between Commonwealth and State Government agencies, Yalata Community Incorporated (YCI) is committed to conserving the unique coastal and inland landscapes on the Yalata IPA." 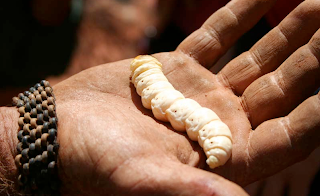 "This grub, known as the witchetty grub, lives in the roots of witchetty trees in the Australian Outback. In order to find one, you have to dig into the roots of the tree, finding a hole in the root where the grub burrowed in, and with your shovel, crack the root in half. The grub will be wedged there in a fat sliver of the root. These grubs are considered to be delicacies among the Aboriginals. They can be cooked over a fire or eaten raw. To eat them raw, you hold them up, dangling them from the head into your mouth. You bite all but the head off, tossing it away. Then you chew and chew until all that is left in your mouth is the rubbery skin, which you also throw away. When I was in the Outback, I had the pleasure of trying one. A couple of my companions tried them too, and we all agreed that they taste like oddly textured scrambled eggs. Their skin is cold to the touch and when they are cut, red and yellow guts spill from their sides."

Posted by Adriana Peliano at 13:47